Chateaubriand and the birth of Decadence 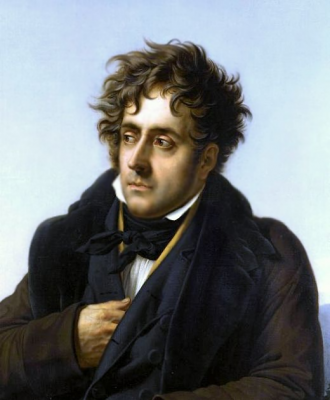 When I was 18 years old a friend and I cycled the length of the Cherbourg peninsular in Normandy at what felt like walking speed, in the face of constant and dispiriting headwinds. At last, reaching Combourg in Brittany, I was very struck with the chateau, which has some impressive round towers topped by battlements and conical roofs, like something out of a Gothic romance. The castle is especially famous because it was for a time the home of François-René de Chateaubriand, the celebrated French writer and politician, whose family had acquired the property in 1761. The castle has long been recognised as a birthplace of Romanticism, but perhaps it would be more accurate to regard it as the birthplace of the Decadent Movement… 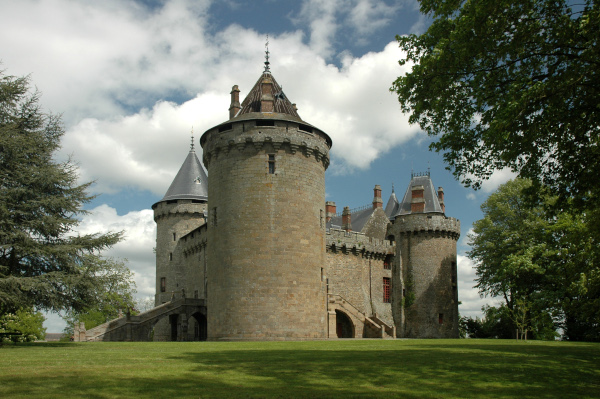 In fact, the Chateau de Combourg as it now appears owes a lot to the restoration undertaken in 1876 by the prominent French architect, Eugène Viollet-le-Duc, whose other restorations included the cathedral of Notre-Dame de Paris, the abbey of Mont Saint-Michel, and the medieval city of Carcassonne. Viollet-le-Duc remains a controversial figure, whose Victorian age ‘restorations’ have sometime been accused of being more like recreations of an imaginary medieval golden age. I myself have always found his work rather wonderful, especially in his sublime restoration of the magnificent hill-top cathedral at Vézelay in Burgundy. As for Chateaubriand, his name and his writings are much more widely recognised and studied in France than elsewhere, perhaps because of his consummate writing style in French. Insofar as he is known abroad it is as someone who opposed the extremities of the French Revolution and was an active champion of the forces of reaction. Along with other Royalist emigrées he fought against the French Republic before being (briefly) reconciled with the Napoleonic order. Later he was a loyal minister and ambassador for the Bourbon restoration kings (Louis XVII and Charles X). His Royalism and his devout Roman Catholicism seem to mark him out as an arch Reactionary, and yet the truth is more complex. He was in many respects much more liberal than his Royal masters and was an advocate for the sort of constitutional monarchy he had observed at first hand in exile in Britain. More interestingly still, the traumatic experience of living through the French Revolution seems to have instilled a sense of decadence and decline.

Chateaubriand’s writings are characterised by a profound melancholy and sense of loss, much of it the result of the traumatic period through which he lived. Several of his close family lost their lives in the Terror, as the radical French Revolutionaries sent many of the aristocracy to the guillotine, including many women. Amongst those killed were Chateaubriand’s brother and two of his sisters. Forced into exile, and condemned to a life of travel, the young Chateaubriand lost his philosophical bearings, and for a while his faith, and his observations of the world were characterised by a profound sense of disassociation. He battled with feelings of pointlessness and a strong conviction, not always borne out by facts, that the worlds of aristocracy and faith alike are passing out of existence in the face of waves of sordid and occasionally violent populism. This profound sense of a world ‘falling away’ would become the calling card of the Decadence Movement later in the 19th century.

That is not the only way in which Chateaubriand anticipated his Decadent descendants. Experiencing feelings of meaninglessness and ennui he experimented with excesses of sexual indulgence and with pushing the boundaries of conventional reality. In his influential novel René, he creates a fictional character marked by all the extreme characteristics of the Decadent dandy, together with all his dangerous introspection. Like many of the leading Decadents the character of René considers himself ‘cursed’ from birth (his mother dies in giving birth to him) and is affected by an extreme lassitude. Exile and melancholy open the door to bitterness, spiritual corruption, and the voluptuous worship of the self.  In the search for sensual gratification René even engages in an incestuous sexual liaison with his own sister, resulting in her premature death in a convent and his own sadomasochistic fury. The way in which the character of René reaches for a series of desperate expedients to shock himself into life anticipates in every detail the world-weary narcissism of Baudelaire, Verlaine, Huysmans and Lorrain. Chateaubriand himself later lamented the deleterious effects of the novel René on the younger generation:

‘In René I exposed an infirmity of my century… a malady of the soul is not a permanent or natural state, it is impossible to reproduce it, to create a literature from it, to exploit it as one would a general passion’.

Subsequent Decadent literature would perhaps prove Chateaubriand to be wrong about this. It also seems to confirm that he was the purveyor of a Decadent world view, long before it became fashionable.

The mature Chateaubriand is characterised by an intense Roman Catholic religiosity which anticipates the conversions undergone later by Huysmans and (temporarily at least) by Verlaine, and the spiritual revanchism of the Decadent writer Bloy. This religiosity represents something distinct from a mere return to former beliefs. Indeed, in its morbidity and irrationalism the religious turn feels less like a rejection of the philosophy of Decadence than a reaffirmation of the tortured and fading world view it presents. It is as though unquestioning adherence to a self-consciously revanchist brand of Christianity is the only thing that can provide the subject with the necessary solace. The religiosity is thoroughly modern in the way that it reflects not so much a theological position as a body of reactionary political and social sentiments. As an ambassador and then a Government minister for the restored Bourbon monarchy after 1815 Chateaubriand was a public representative of the Metternich system which maintained anti-democratic government across much of Europe in the first half of the 19th century. Having said that, he was a man full of contradictions, an advocate of modernising and liberalising autocracy to better preserve its legitimacy who was consistently ignored by more conservative colleagues. His sense of fighting a losing battle against a wave of bourgeois and proletarian revolution was confirmed when he lived to see the final demise of the Bourbons and their replacement by the ‘July Monarchy’ of Louis-Philippe, the Duc d’Orleans, in the rather milder revolutionary upheavals of 1830. 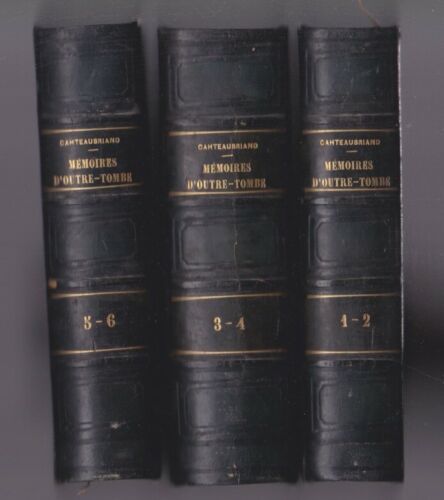 In his autobiography, Memoirs from Beyond the Tomb, Chateaubriand tells the story of an extraordinary life in which, like Arthur Rimbaud, he effectively went off the map of the world as it was then known. Rimbaud may have dreamed of meeting North American Indians, but it was Chateaubriand who actually travelled in the wilderness with the Iroquois. This was merely the most colourful episode in a life that took him to the splendid ‘court’ of the Emperor Napoleon, to live in poverty (and later in wealth) in Georgian London, and even on an embassy to the Ottoman Empire in modern-day Turkey. A life of disruption and dislocation, albeit a life described in the most exquisite and elegant French prose, something that makes Chateaubriand an object of veneration and a subject of study for French students to this day. None of this ceaseless wandering did anything to blunt Chateaubriand’s world-weariness and questioning of meaning. Reporting his near drowning off the Azores when he was 20 years old he muses that perhaps it would have been better for him to have drowned, saving him from many years of heartache and disillusionment, as well from the cares of position and power in the world.

A similar lassitude informs his account (in the same memoir) of the life he might have led as an English country gentleman in Suffolk. This incident is taken up and retold at length by WG Sebald in his meditational novel The Rings of Saturn, first published in 1998. Sebald is engaged in his own wanderings through the Suffolk countryside, a strangely depopulated landscape where the dead are in more in evidence than the living. It is a story of a road not taken, of a life that might have been. The impoverished aristocrat Chateaubriand, a refugee from the extreme violence of the Terror, stays for a while with a family of prosperous landowners near Bungay in Suffolk who take him completely to their hearts. Drawn to the intelligence and vivacity of Charlotte Ives, the daughter, he becomes (in effect) her unofficial tutor, bringing her the benefit of a rich education in French culture, classical literature and the arts. Young and flirtatious perhaps, Chateaubriand only understands too late that the young woman has fallen in love with him. On the day of his departure from Bungay he has a heart-breaking encounter with Charlotte’s mother who (on behalf of herself and her husband) suggests he marry the girl and be adopted by the family, effectively becoming their son and heir. In consternation he cries out ‘Stop! I am married’, revealing that he was already contracted to another girl in France. Although he barely knew his French wife and their marriage was yet to be consummated it was a fatal blow to the hopes of Charlotte’s mother, who immediately fainted from the shock. 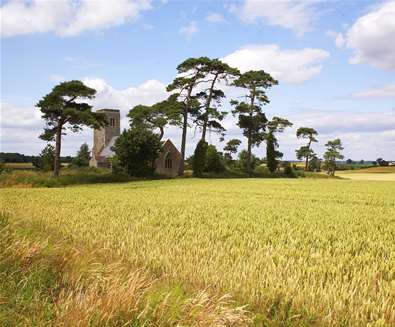 This being Chateaubriand, however, the story is told without any trace of sentimentality. Decades later, when he is French Ambassador in London, Charlotte Ives and her children arrive unannounced at his residence. Now introduced as Lady Sutton, she is married to a British Admiral. Citing their youthful friendship Charlotte comes seeking not only a meeting but also preferment for her son, something which Chateaubriand is now well-placed to accomplish. The incident throws Chateaubriand into a brief crisis. Would it really have been any worse a life if he had been an English country gentleman, instead of a soldier, diplomat and womaniser? Wouldn’t it just have been different? Chateaubriand answers his own question. It would not have mattered one jot. In the end, he suggests, everything is meaningless and doomed to fall away, and sorrow is a wound that can never be healed. As the title of his memoir suggests, by the time the reader gets to read his account, Chateaubriand will himself be dead. Like Sebald we are tempted to identify completely with the Vicomte de Chateaubriand in his finely wrought observations and walk in his footsteps down paths not taken, in a forensic search for our own half-submerged memories:

’Writing is the only way in which I am able to cope with the memories that overwhelm me so frequently and so unexpectedly. If they remained locked away, they would become heavier and heavier as time went on, so that in the end I would succumb under their mounting weight. Memories lie slumbering in us for months and years, quietly proliferating, until they are awoken by some trifle…’

It is perhaps also in this Proustian enquiry into the nature of memory that we can finally claim Chateaubriand as the prophet and forerunner of the Decadent Movement. He is exposed to the same type of personal crisis, brought on by involuntary memory, and responds in exactly the same way, seeking to recover memories in order to make sense of the peculiar mystery of his life.

For me the name Chateaubriand will always remind me of a day several decades ago when I arrived on my bicycle at a beautiful castle in Brittany which had once been home to a famous and well-travelled writer, something which even at that time felt like an important point of departure for me…