We all know how crazy suddenly everyone became about Japan. After the country’s enforced opening to foreign trade in the 1850s, Japanese culture seduced the European artistic crowd, converting many literary figures into enthusiasts and collectors. Stunning Japanese prints, fabrics and netsuke were a novelty, they were relatively affordable, and they radiated sophistication and cultural ambition. Zola got himself painted by Manet with a Japanese print pinned on the wall. Painters’ models started wearing kimono and posing against the backdrop of decorated screens. Whistler made Chelsea look Japanese in his nocturnes. By 1885 the Japan craze was so widespread, that Gilbert and Sullivan turned it into a comic operetta, The Mikado.

For all this explosion of japonisme, however, it is striking how few writers and artists in the West had a direct knowledge of Japan. Hardly anyone could read Japanese, of course, outside highly specialised philological circles, and very few travelled to the Far East. A notable exception is Lafcadio Hearn, an Irish writer who arrived in Japan in 1890 and never left the country again, dying there in 1905. During these years, Hearn published a large number of essays and stories on Japanese themes that made him well known not only among readers of English, but also in French, German, Italian and other languages. This in itself would have made Hearn stand out among Western writers. But he did something even more unusual. Hearn became Japanese, that is, he renounced his British citizenship in order to take up Japanese nationality, and in this process he also acquired a new name: Koizumi Yakumo.

There has been a small revival of interest in Hearn in the last couple of years, with Penguin and Princeton University Press publishing collections of his stories. Some scholars have also started to argue that Hearn should be approached as a key figure of fin-de-siècle literature, and not as an eccentric. When I say, ‘some scholars’, I mean scholars in the West. For in Japan, Hearn has always been on the radar of both general and academic readers. Hearn museums in Matsue and Yaizu keep his memory alive with permanent and special exhibits. His works – all translated into Japanese shortly after his death – have never been out of print, and several of his stories have been adapted into manga and films. The most famous of these is Kobayashi Masaki’s 1965 Kwaidan, based on a collection of supernatural stories that Hearn published in 1904. There is a sense of poetic justice in Hearn’s Japanese translations and adaptations because so much of his work incorporated traditional Japanese culture, such as folk tales and ghost stories. Translation (I was almost going to write ‘back’) into Japanese closes a circle of transmission that goes from Japan to the West, via Hearn’s writings, and back to Japan. In the course of these migrations across space and art forms, the dialogue between Japan and the West becomes more dynamic, opening itself to other voices and points of view, and bringing to light questions about cultural translation. This is, I think, the most interesting aspect of Hearn’s work.

Hearn, who never received a formal education because he emigrated to America at the age of nineteen, was formidably cosmopolitan in his literary taste. Most of all, he was extremely well read in French literature. As a young man, he produced remarkable translations of Flaubert’s Tentation de Saint Antoine and Théophile Gautier’s fantastic tales. As an adult, he became especially fond of the travel writings of Pierre Loti, no doubt because he saw Loti as a model for what he was trying to achieve in his own Japanese essays and stories. He said to a correspondent that he thought that Loti’s writings anticipated the yet undiscovered art of colour photography. And this desire to create colour through writing, to paint with words, is something that haunts Hearn’s works. The French writers that Hearn admired also influenced his style, so that the dialogue between Japan and the English-speaking West in his writings is always, in fact, triangulated via France.

One of Hearn’s recurring concerns was with the act of perception. Accurate description was not enough for him. He wanted to know why what we describe appears to us in a particular way, what affects our ability to see and feel. A good example is Hearn’s short essay ‘A Street Singer’, published in his collection Kokoro (1895). ‘Kokoro’ is one of those untranslatable terms that, as the French philosopher Barbara Cassin has shown, compel us to keep translating, in metaphorical as well as actual linguistic terms. It is a Japanese word that means heart – not the physical organ, however, but rather heart as related to the emotions and the spirit. As Hearn explains, ‘this word signifies also mind, in the emotional sense; spirit; courage; resolve; sentiment; affection; and inner meaning,—just as we say in English, “the heart of things”.’i

‘A Street Singer’ opens with an everyday scene that plunges us straight into the extraordinary world of daily life in turn-of-the-century Japan:

‘A woman carrying a samisen, and accompanied by a little boy seven or eight years old, came to my house to sing. She wore the dress of a peasant, and a blue towel tied round her head. She was ugly; and her natural ugliness had been increased by a cruel attack of smallpox. The child carried a bundle of printed ballads.’ii

Neighbours and passers-by immediately assemble outside Hearn’s house, curious to see the performance. And as soon as the woman starts singing everyone is enraptured:

‘as she sang, those who listened began to weep silently. I did not distinguish the words; but I felt the sorrow and the sweetness and the patience of the life of Japan pass with her voice into my heart,—plaintively seeking for something never there. A tenderness invisible seemed to gather and quiver about us; and sensations of places and of times forgotten came softly back, mingled with feelings ghostlier,—feelings not of any place or time in living memory.

Then I saw that the singer was blind.’iii

Only four pages long, ‘A Street Singer’ is an extremely good example of Hearn’s talent to compress philosophical discussion, and to adapt poetic material to the essay form. The figure of the blind singer taps into cultural associations familiar to many Wester readers (think of Homer as foundational myth of European poetry). But it also has a more personal, immediate association, for Hearn was himself blind in one eye, and was extremely aware of the impact of visual impairment on his work as an artist of words. In ‘A Street Singer’, Hearn explores the relationship between perceptions of beauty and ugliness. He also deals with how to translate voice and music into writing. And he asks himself why Japanese music, so alien to untrained Western ears, can have such an impact on him and, even, bring up personal associations that clearly have nothing to do with his time in Japan. For the encounter with the blind singer reminds Hearn of another encounter he experienced long ago, back in London:

‘One summer evening, twenty-five years ago, in a London park, I heard a girl say “Good-night” to somebody passing by. Nothing but those two little words,— “Good-night.” Who she was I do not know: I never even saw her face; and I never heard that voice again. But still, after the passing of one hundred seasons, the memory of her “Good-night” brings a double thrill incomprehensible of pleasure and pain, —pain and pleasure, doubtless, not of me, not of my own existence, but of pre-existences and dead suns.’iv 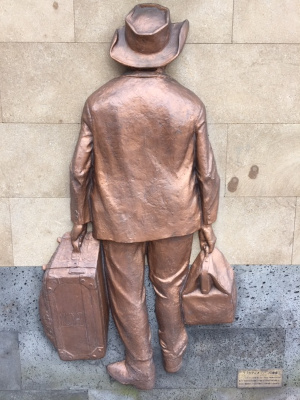 What is the association between the blind Japanese singer and the English girl in the London park? The answer to this question shades into the supernatural, for Hearn. ‘A Street Singer’ is about the haunting power of the human voice. One of the remarkable things about this essay is how Hearn turns these two strangers – the Japanese singer and English girl – into doubles of himself, in order to bring into vivid relief his own identity as a stranger in Japan, and as a perennial wanderer. The blind singer revealed something about the ‘inner meaning’ or ‘kokoro’ of Japan to Hearn – a meaning that, for him, was bound to the condition of untranslatability.

Stefano Evangelista's book, Citizens of Nowhere: Literary Cosmopolitanism in the English Fin de Siècle, which contains a chapter on Lafcadio Hearn, will be out with Oxford University Press next year.