John Gray’s Silverpoints is a slender volume. Published in 1893 by the Bodley Head, it contains only 29 poems and almost half of these are translations of Paul Verlaine, Stéphane Mallarmé, Charles Baudelaire and Arthur Rimbaud. Texts such as his version of Verlaine’s ‘Parsifal’ proclaim Gray’s profound immersion in recent French literature and point to the Decadent values of the collection as a whole: 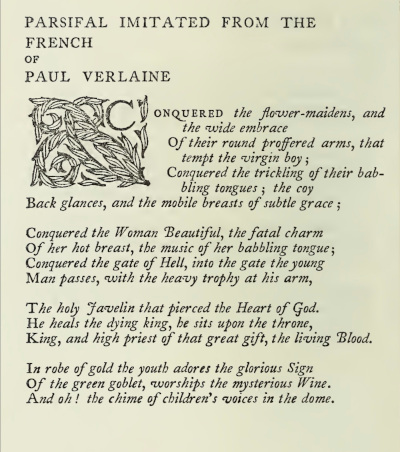 Compare this with the French original:

Notice how Gray does not use the word ‘translation’ to describe what he is doing with his source material here. His choice of ‘imitated’ indicates a more complex mixture of influence and innovation. Verlaine’s poem opens with a direct statement: ‘Parsifal a vaincu’ (Parsifal has vanquished); but Gray inverts standard English word order (‘Conquered the flower-maidens’) to sound more old-fashioned. His poem performs its origins in French. So when Gray replicates Verlaine’s lines of twelve syllables, we should remember that this is not a simple translation – his poem is deliberately and thoroughly foreign to English ears. It creates a dialogue between French and English ways of writing poetry.

Gray was relatively obscure at the time this collection was published. He was a protégé of Oscar Wilde, known for his good looks and rumoured to have been a model for the central character in The Picture of Dorian Gray (1890). But Silverpoints established him as a key poet of Decadence in English. This makes his imitation of ‘Parsifal’ ironic: in comparison with the louche reputation of his French contemporaries, Gray chose to render a poem about the fierce chastity of a medieval knight who refuses the ‘proffered arm’ of temptation. The ‘chime’ of rhyme, rhythm and sound in his poem affirms the sensuous values of art and symbol instead.

But Silverpoints is also a beautiful object in itself. The volume was designed by the artist, Charles Ricketts. As well as the elaborate covers, which are inlaid with a repeating willow design, Ricketts also paid close attention to the layout and design of individual poems in the collection. Parsifal, for example, is set out with an intricate decorated initial letter. Although similar designs are used throughout the collection, in this case Rickett’s design recalls medieval illuminated books. It helps to evoke the Grail myths that inspired Wagner to write the opera, Parsifal that inspired Verlaine to write the sonnet imitated by Gray. Silverpoints creates a wonderful chain of connections between disciplines and languages, as art speaks to music and literature across Europe through Rickett’s realisation of Gray’s poetry on the page.

Teaching at the University of Glasgow, I am lucky that Special Collections in the university’s library owns an original edition of Silverpoints. (Only 275 copies were printed.) But lockdown and the cancellation of face to face teaching recently meant that I have been unable to share this with my students. However, not only is Glasgow endowed with some amazing archival resources, but staff and students benefit from generous and committed librarians and support staff too. On one of the last days before lockdown, assistant librarian Bob MacLean was kind enough to take a short video of himself handling the copy of Silverpoints so that students could appreciate some of the details that so impressed contemporary readers in the 1890s. I’m pleased to be able to share that here too: